The Heller and Clausen Tax Grievance Group was established in June 2008 by Adam B. Heller and David W. Clausen. Founded on the simple principal of helping their clients pay the lowest possible property taxes, the firm has quickly become the fastest growing property tax company on Long Island. With combined experience of over 30 years in the industry, they have saved Suffolk and Nassau residents over 23 MILLION DOLLARS, a figure that continues to increase daily.

Prior to starting their own firm, both Adam and David had used other well known tax grievance companies in an attempt to lower their own property taxes.  After receiving minimal reductions it became apparent that existing companies were using outdated technology, and worse, settling for far less of a property tax reduction than their client’s were entitled to.  After years of extensive research and proprietary system development, The Heller & Clausen Tax Grievance Group was born and has been winning record-setting property tax reductions and refunds ever since.

Our sole purpose is to aggressively pursue reducing our client’s property taxes to the lowest amount legally allowable through the tax grievance process.

Adam B. Heller, is the Co-Founder and CEO of The Heller & Clausen Tax Grievance Group LLC, based on Long Island since 2008. County licensed in the field of property tax Grievance since 2007, he personally negotiates every client’s property tax reduction ranging from multi-million dollar commercial buildings and rental homes to residential primary owner-occupied residential homes.

Adam has been recognized by the likes of George Ross, Executive Vice President of the Trump Organization and star of NBC’s The Apprentice who says “Adam is simply the best on Long Island when it comes to securing property tax reductions.” His firm has saved Long Islander’s over $25M, a figure that increases with every property tax reduction he attains for his growing clientele. 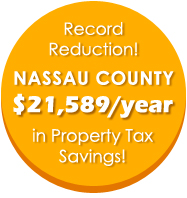 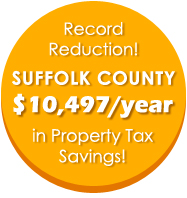 What is a Tax Grievance?

7 Big Tax Breaks Homeowners May Not Know About

Appealing Your Property Tax Bill in Nassau and Suffolk NY

This web site may contain concepts that have legal, accounting and tax implications. It is not intended to provide legal, accounting or tax advice. You may wish to consult a competent attorney, tax advisor, or accountant. Read our Privacy Policy
The Heller & Clausen Long Island Tax Grievance Group, LLC. 333 Route 25A Suite 120 Rocky Point, NY 11778